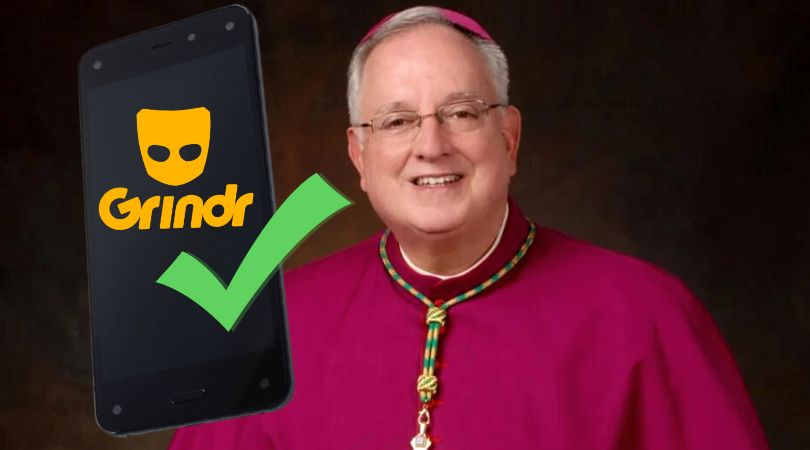 Bishop William Callahan, how dare you reassign the infamous "Msgr. Grindr," aka Msgr. Jeffrey Burrill, to a parish.

Bp. Callahan, how can you reinstate to a parish Burrill, a cleric bearing the notoriety of never having denied his use of the gay hookup app Grindr? And neither have you, bishop, denied these nefarious allegations. For the rest of us priests who put in a full day's work and then some, and don't have the title of monsignor, your reinstatement of Burrill is a slap in the face.

Burrill, in the immediate aftermath of The Pillar's revelatory piece last July, did not offer one word to refute what was published about his repeated immoral dalliances or offer any apology or explanation. Nor did he move to file a defamation lawsuit against The Pillar for its supposedly defamatory article.

In fact, what Burrill did was slink away in shame to some hole to hide out for the past 11 months. It would appear to the entire world that from his actions and lack of denial, Burrill, a duly ordained priest, was guilty as charged — at best — of a sodomitical search obsession.

But miraculously, now everything is somehow instantly A-OK. Callahan, it's so foolish to reinstate Burrill as if he is a priest in good standing! Wake up, Your Excellency: Burrill is not in good standing. It would appear that he does not have two straight legs to stand on.

Burrill ... did not offer one word to refute ... his repeated immoral dalliances or offer any apology or explanation.

What are the straight men at St. Teresa's in the La Crosse diocese supposed to think? Do you imagine it will be easy for them to put aside thoughts of Burrill possibly hitting on them and on their sons? Wake up, Callahan! No one wants a potentially promiscuous homo as their pastor.

If Burrill is guilty, then he needs to be defrocked as he would not be fit to be a priest. If he is guilty, then you, Callahan, must release Burrill from the priesthood and let him provide for himself in some employment other than the Roman Catholic Church.

Reflect on this, Bp. Callahan. Burril is now publicly accused of having engaged in grievous sin. Your blanket atonement and appointment of Burrill to St. Teresa's parish as an administrator is ill-advised, to say the least. I condemn the decision, pray for your immediate change of heart and hope that you regain your sanity.

Priests are paid to celebrate the Church's sacraments, not to hook up with other men. It is seriously sinful for a priest to spend his down time from the job in devilish pursuits. It's one thing for a priest on his day off to play golf. No one will go to Hell for winning a round with his buddies. On the other hand, the priest who, on his day off, spends his time on Grindr seeking men to sexually abuse, however, is an abomination. What kind of priest can preach a good homily of any sort after spending a night in such sinful pursuits?

Where is this man's public denial or affirmation and atonement for his sin?

As a priest, I believe absolutely God can forgive sinners. Over my long priesthood, I have, through the administration of the sacrament of reconciliation, witnessed thousands of conversions, even of sodomites. These men and women have returned to God after putting aside lives of sin.

I pray Burrill has begun the process of seeking God's forgiveness. I pray he has resumed saying Rosaries and completed penitential practices to make things right with his Creator.

Bishop Callahan, in your letter reinstating Msgr. Burrill to ministry, you write: "Msgr. Burrill engaged in a sincere and prayerful effort to strengthen his priestly vows."

What in Hades is this supposed to mean? Did Burrill repay all the funds he stole from the Church to pay for his homo hookups? What about doing some intense penance for defiling the sacraments of the Church when in a state of grievous sin? And what about a simple apology to all those Burrill duped for years by just pretending to be a holy priest?

To atone for a sin, penance should correspond to the grievousness of the sin committed. Grievous sins require serious penance. In Burrill's case, a penance of three Hail Mary's and one Our Father just wouldn't cut it. In times past, a priest caught buggering other men would have been run out of town and defrocked.

What Were You Thinking?

Burrill's alleged numerous gay hookups on Grindr, yet to be denied, require a whopper of an explanation or his complete removal from active ministry. The damage of scandal has been done. Few marriages survive a spouse's repeated adulterous liaisons. So, why do you think Burrill's marriage to Christ and to His Church is any different? Can a marriage survive in which adulterous behavior on the part of one's spouse is permitted? Or is it that Burrill is innocent? If he is guilty and gay, then is the sin of adultery only for straight men?

If Burrill is guilty, then why do you condone his sinful behavior? Is it because you don't think sodomy is sinful? If so, then you should immediately resign from your position as a bishop because the Church, our Sacred Tradition and Sacred Scripture all condemn sodomy as gravely sinful. This is a black-and-white issue, period.


A few thousand years ago, God judged Sodom and Gomorrah owing to the sin of sodomy. He rained down fire from Heaven upon all the inhabitants of those cities. They were all incinerated by the fire from Heaven. Do you think God will not rain down his wrath upon today's sodomites as well? Monkeypox is now making the rounds among many of these men; God will not be mocked.

Callahan, your reinstatement reads, "[T]he diocese of La Crosse has received no allegations of illegal misconduct of any kind by Monsignor Burrill." But what has this to do with anything? In the United States right now, it's legal to kill a child in the womb and millions have been murdered since Roe v. Wade became the supreme law of the land. What's legal or illegal at any given moment is far different from what is moral or immoral as God ordains. God has already weighed in that sodomy is extremely sinful.

Not one Catholic cares about the legality of what Burrill has done. Catholics care about whether their pastor is good and holy, not whether he keeps a step ahead of legal authorities by keeping his hands off minors. And who can prove or disprove whether the many hookups Burrill allegedly engaged in using the Grindr app were all with consenting adults?

Wake up Callahan; no one accepts your cover-up.

As a priest, I condemn you for reinstating Burrill in a parish. I demand you resign from your position as ordinary of the diocese of La Crosse. Your actions demonstrate you do not have the moral capacity as a bishop to govern the Church. Your inept supervision of Burrill condemns you.

Who Should Be Chastised?

Moreover, to exacerbate an already bad situation, your vindictive destruction of Fr. James Altman convicts you as well. Father Altman has neither committed a single crime in the eyes of the state nor in the eyes of the Church. But you removed his faculties and stripped him of his pastorate!

As a priest, I denounce you as well, Callahan, for your punishment of Fr. Altman. Believe me, there are hundreds, if not thousands, of U.S. priests that back me in this denunciation. As a body of faithful priests, we are offering up numerous Masses, Rosaries and novenas for Fr. Altman's reinstatement, and God will answer our prayers because they are just. Be warned, and repent of your evil doings before it is too late. You will be judged severely if you remain steadfast in your sin.

Bishop, at the end of your reinstatement of Burrill, you claim, "In the Hearts of Jesus and Mary and Jesus, I am."

But your very words mock the faith of the Church and God Himself. That selfless love found in Our Lord, the Mother of God and the Almighty have nothing to do with your sketchy performance as a bishop. What in Hades do you mean by "I am in the Sacred Heart of Jesus"? By your actions, you appear about as far from compassionate and loving as a man can be! You demonstrated that clearly by your actions against Fr. Altman. And your act of reinstating a gravely immoral priest — if the reports, which he has yet to deny, are true — is not in union with the most Sacred Heart of Our Lord, and the Immaculate Heart of Mary — but in union with demons.

Wake up Callahan; no one accepts your cover-up. Step down. Resign. If you can't stop selling out Christ, then maybe start selling used cars. You might have a knack for that line of work.