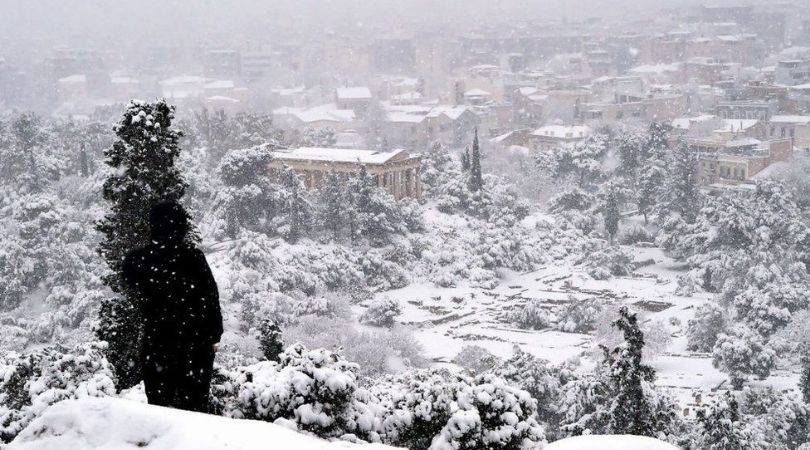 After spending an hour or so digging out my driveway once again during this hellacious winter, I’m convinced that Scripture authors got it all wrong! Hell is one frozen wasteland like my community in the northern Midwest.

While I continued to grunt and groan removing the snowdrift in front of the garage, I pondered how a little “global warming” would be just fine about now. And why, oh why on God’s green earth would my boss, Michael Voris, pick Michigan, of all places, to start St. Michael’s Media? Yes, Michigan is known for corrupt politicians and evil Churchmen. But it’s also known for the country’s worst weather — hot, humid summers and Siberian winters.

Voris is a man of many things, but I wish he’d given it just a little more thought back in 2006 when St. Michael’s Media was founded. I wish he would have reflected upon the advantages of setting up the media apostolate somewhere warmer, say Florida! It would be so much easier on a man like myself to turn down the air conditioner on a humid summer day in Florida, rather than deal with multiple feet of snow on a workday. Just saying!

All humor aside, as the U.S. heartland plods through yet another subzero day, with many parts of the country recording new record lows, the climate change aficionados and global warming alarmists are singularly silent. How could they respond to the cold, hard reality that the pseudoscience they’ve been pushing for political gain is far from demonstrable? This false scientific narrative has been jettisoned by the last four weeks of record-breaking cold!

Oh, and by the by, people are dying from this subzero weather. Authorities fear that many homeless, who eke out a living in the big cities of the North — from Milwaukee, Wisconsin eastward to Boston and even points further south — will die from this “cold snap” owing to exposure and inadequate heat.

This dire situation of people dying from the intense cold is exacerbated in many locations, moreover, by power outages and inadequate supplies. Funny, isn’t it, that solar power and wind turbines are deficient in these brutal winter conditions. The wind turbines just don’t turn when gears freeze up, and solar power is diminished when snow covers the panels or sunshine is nonexistent for days on end like the last month or so in Michigan.

This conversation today about the real lack of global warming brings to mind one of Church Militant’s first successful undercover operations in February of 2020, when a large group of southern California Resistance members sat in on Bp. Robert McElroy’s spiel at San Diego University. As Church Militant reported at the time, the gist of the bishop’s talk was about how deadly climate change supposedly was and how Catholics should vote for politicians who would fight against this deadly evil.

Bishop McElroy had the audacity to say that thousands would die from climate change within the next couple of decades and that measures needed to be put into place immediately to forestall this dire situation. Archbishop McElroy did not say vote for Biden, but he did hit systematically in his talk every single Democrat talking point on the topic of climate change and global warming. This evil needed to be kept foremost in mind when it came to voting in the recent presidential election; and you know the Republicans don’t even give the time of day for this alleged evil.

Moira Malley was one Catholic on the ground who attended the presentation by the bishop and posed a question to him at the presentation’s end. Sadly, as she noted to Church Militant staff in the aftermath of the presentation, McElroy never really answered her question: “Why didn’t you talk about the Ten Commandments … and how abortion is torture and murder?” McElroy, one smooth talker, evaded directly answering Moira’s question and just reiterated how the Democrats and their policies were the “bees’ knees” for saving the world, instead of the directives of Our Lord and Savior Jesus Christ!

So a year later, the bishop’s choice for president is now in the White House with climate change and global warming being primary concerns for the new “Catholic president.” I wonder how warm the archbishop is as he sits in his cathedral in sunny San Diego, California, knowing that, with Biden’s presidency, a new reign of terror has been ushered in against the unborn worldwide, all totally funded by the U.S. taxpayer.

Oh yeah, bishop, thousands are now being saved from global warming because they voted for Biden! No matter the unborn millions now being aborted and the hundreds at risk of dying from exposure each winter in America’s northern cities! Those in tents living underneath Chicago’s expressways are of no significance, as with no fixed addresses they don’t vote anyway! What’s significant to Bp. McElroy and to the many of his ilk in the U.S. hierarchy is that the Democrats remain in power and federal money keeps flowing into the bishops’ coffers to fund their all important “social programs.”

The heartland of America is one frozen hell this week, with millions going without power and digging out from unprecedented snow and ice storms. Perhaps some will get down on their knees and ask God for His intervention and some much-needed sunshine. But, then again, why invite God’s hand in what’s playing out if the weather is controlled by humans and all their carbon emissions? God help us all in these evil times.