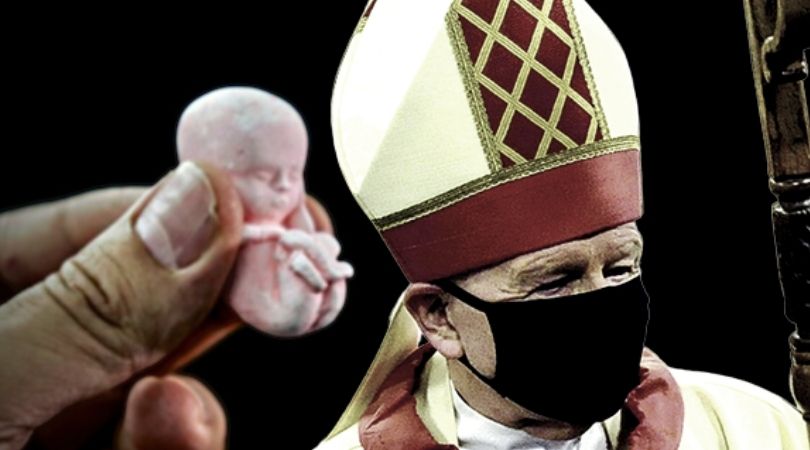 The recent Supreme Court leak detailing a potential overturn of Roe v. Wade has sparked a firestorm of condemnation against legalized child killing across the nation. Speaking out against this demonic practice and the high court leak were former President Donald Trump and numerous other Republican lawmakers. But conspicuously absent from this "dialogue" are our U.S. bishops. Despite the millions of America's children who've lost their lives owing to legalized abortion since Roe, these Church leaders as a whole remain muzzled.

Only a handful of U.S. prelates have said a word in condemnation of Roe, the recent Supreme Court leak or the practice of abortion in general. To this silent majority, I say as a priest, and on behalf of my concerned fellow clerics, your silence condemns you!

Silent shepherds, you're tasked with caring for God's flock. But your grave dereliction in this God-given duty to uphold Church doctrine regarding the dignity of all human life — beginning with conception — is damning.

As a priest, I pray that before your lives come to a close, you repent of this grievous sin that cries to Heaven.

Why have so few of you prelates spoken out against Roe during this recent skirmish? In this war against the unborn, why do you remain mute? Yet, you admonish Russia's President Vladimir Putin for his war against Ukraine, a war that's caused far fewer causalities than the millions of babies lost since this abortion-induced bloodbath swamped Western society some 60 years ago.

Millions have been killed in the United States alone because of Roe, yet you remain muzzled? Why do you have no words of rebuke for our radically pro-abortion President Joe Biden and Vice President Kamala Harris? Why does pro-abortion Catholic Nancy Pelosi get a pass for her part in the deaths of millions of our fellow Americans? What hypocrites you all are!

Like St. Paul chastised St. Peter, as recorded in chapter two of Galatians, I also castigate the lot of you. In this war for lives and for souls, you'll never get another chance like this to issue a salvo of truth bombs. So, wake up, step up and do your job.

What hypocrites you all are!

Before 2020's stolen election, one of our good priests, Fr. James Altman, said, "You can't be Catholic and be a Democrat — period." For his condemnation of this pro-death political party, you've sidelined him but not silenced him. Silent bishops, your complicit silence against the decades-old genocide against children in the womb damns you. But it's not too late for any one of you — or the lot of you — to repent of your complicity in this ongoing evil. Take to heart Fr. Altman's condemnation for the good of your personal salvation.

Of the many evils denounced by Christ's Apostles, the love of money was given special significance.

As St. Paul warned in his first letter to St. Timothy, "The love of money is the root of all kinds of evil." Sadly, the purse strings of the Democratic Party muzzle all too many prelates.

As a priest, and as my confreres concur, I urge you to forgo the millions of government grants, for this, that and the next scheme to aid so-called religious organizations. But you protest: "Oh, it helps us fund Catholic Charities!" What rot! If you are simply funding your assistance programs from the pocketbooks of U.S taxpayers, it's not charity but extortion.

What hypocrites you current bishops have become! You are just money changers taking large chunks of change for yourselves in the name of feeding the poor. Judas was well-known for doing likewise. I need to remind you that your end will be the same as his if you continue on the same perfidious path.

It's not charity but extortion.

As a U.S. priest, I will not remain silent. Roe needs to be abolished, and all abortion and abortifacients along with it. And I will devoutly include in every Mass I say the intention that this evil will be brought to a swift end. And many of my fellow priests are doing just the same. We will act the part of a good pastor in your stead.

At the final judgment, all of us will be judged for what we did or did not do in this war against abortion. I choose to defend human life on earth and embrace eternal life with God in Heaven. I admonish all of you bishops to do the same.