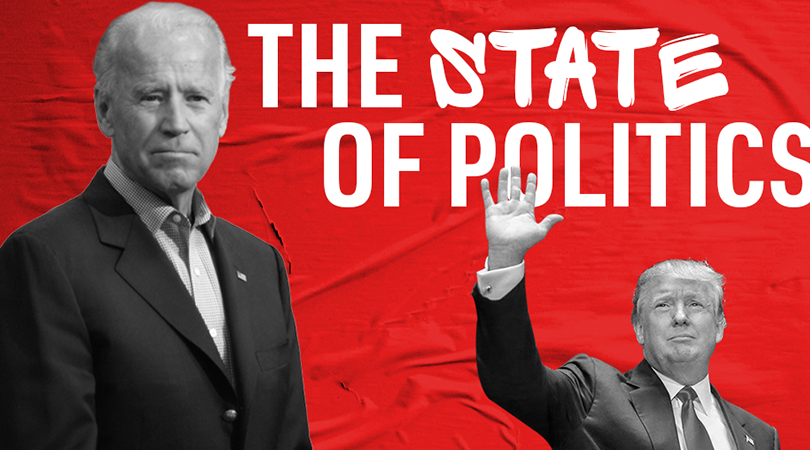 The State of Politics

As of this writing, we do not know who the president of the United States will be in January. Nor do we know which party will control the U.S. Senate. What we do know is that the country is deeply divided. And it’s not just political.

The division goes far deeper than politics or even ideology. This country and the Western world are divided on the meaning of reality.

This kind of unique spiritual divide has happened only twice in world history. The first time came after the Resurrection, when Christianity spread through the pagan world. The second time was when the new paganism spread throughout the Christian world. In other words, it’s happened at the beginning of the Christian era and the beginning of the post-Christian era. Both times in history were marked by great persecution of Christians.

What the pre- and post-Christian worlds have in common are two basic things: (1) disrespect for the dignity of the human person, and (2) a collusion of the rich and powerful to quash any thinking and speech contrary to the accepted narrative. All the things we’ve been seeing with today’s progressive movement are the result of rejecting God.

Christ is light for the soul. When He is rejected, one is unable to see reality for what it is. This forces you to create your own reality. If you’re not one of the powerful elites, it forces you to live by someone else’s constructed reality.

All the psychological manipulation that’s played out for the past four years through the media, medical and political establishments was for one purpose: To defeat Donald Trump. He is a threat to their power. The propping up of Joe Biden when Bernie Sanders was sure to win the Democratic nomination, the manipulation of the virus pandemic, the riots, the shutdowns and the mail-in ballots were all ordered to this purpose.

Minorities are beginning to wake up. Since the Reagan era, minorities and the progressive elites have been strange bedfellows in the Democrat Party. Now that Blacks and Hispanics are waking up to realize they’ve been manipulated and used pawns to maintain the power of the elites, we are seeing the realignment of the parties. The Democratic Party has become the party of the rich and powerful, while the Republican Party is becoming the party of the middle and lower classes and those who resist the insane narrative of the Left. This is the opposite of what the parties were just 50 years ago. White progressive liberals with no interest in objective truth or moral integrity now rule the Democratic Party.

When a progressive Leftist imagines a Republican voter, he sees a false caricature of a toothless, middle-aged, southern, white-supremacist male with a rifle in a pick-up truck. When a conservative imagines a progressive Leftist there is no caricature. They see someone sympathetic to socialism, who wants killing preborn babies to remain legal, who values State-sanctioned unnatural "marriage," who favors the news and social media censoring speech that doesn't neatly fit into the politically correct narrative and who avoids all dialogue because it may uncover truth.

This is not a partisan or uncharitable assessment. Most people know it’s true. If Democrats regain power, the politically correct narrative will be strictly enforced. Catholic teaching on natural law—especially as it relates to human sexuality—will be deemed “hate speech.” The First Amendment to the Constitution will be effectively eradicated. And that’s just the beginning. People capable of rationalizing the killing of preborn children are capable of anything.

But, of course, there is great hope.

To put this all in perspective, no matter what happens to us politically in this republic, we must never forget we live in a kingdom, a kingdom with an infinitely benevolent King. God can make good come out of any evil we produce (Romans 8:28). Trust in Him. This life is short. What matters is eternity.