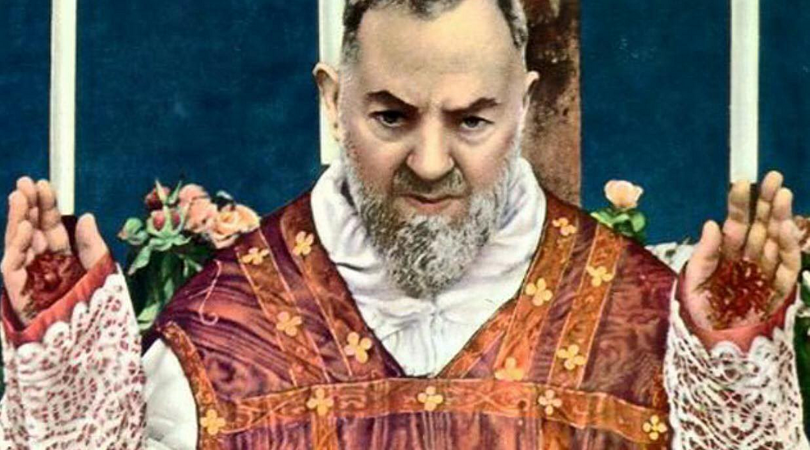 Tragically and to our detriment, we forget how the faithful dealt with bad bishops in past decades. Exactly a century ago, the diocese of Manfredonia in Italy had one extremely bad homosexual archbishop, Pasquale Gagliardi. This queer prelate was known by just about everyone, except Popes Benedict XV and Pius XI, for promoting gay men to the priesthood and episcopacy and by flagrantly squandering the patrimony of his diocese.

Early on in his term as archbishop of Manfredonia, Gagliardi began his full-scale persecution of Padre Pio. Gagliardi is attributed with manufacturing the story that Padre Pio faked Christ’s wounds (the stigmata) by use of carbolic acid, the main ingredient of the disinfectant Lysol. Despite this story being fundamentally laughable, it got traction in the Vatican for over a decade. It was used by Gagliardi to substantiate his delicts against Padre Pio as a priest, stopping Pio from saying Masses in public, as well as hearing confessions of the laity.

In 1919, the very first year of Padre Pio’s stigmata, an organized group of laity in the town of Vieste in the archdiocese of Manfredonia had had enough of Gagliardi and his homosexual abuses.

As Bernard Ruffin records in his book, Padre Pio: The True Story:

A riot broke out against (Gagliardi) in the town of Vieste; he was wildly hated by the people of his archdiocese. ... Gagliardi was at the time celebrating Mass in a side chapel. A crowd of 600 men, women and children burst in and pelted him with stones and bricks. Despite the fact that the prelate was saying Mass, the mob charged the altar, grabbed his missal and paten, threw them at him, knocked him to the floor, and began to punch and kick him until several priests intervened to drag the archbishop into an adjoining room, slamming the door against the raging crowd. As the surging mass of people cursed and pounded the door, two policemen arrived and escorted Gagliardi from the church through a back door. The mob ... poured into the street and surrounded the archbishop, the policemen and the priests. A group of angry women with butcher knives seized Gagliardi and, ripping off his vestments while the men chanted obscenities, were about to castrate him, when just in time, a contingent of state troopers (carabinieri) arrived to rescue the prelate intact and carry him, unconscious and bleeding, to his mansion, where he was bedridden for a month.

Although forced castration may not be the answer to the predatory homosexual crisis in the Church, the real pushback on the part of the laity in Vieste, Italy has to be commended. The laity showed their real frustration and displeasure with their bad Ordinary. Sadly, Gagliardi was not removed as the Ordinary of Manfredonia in Italy until October of 1929, and because of this delay by the Holy Father to act, much havoc would result. Unmeasurable graces were lost upon the faithful and many penitents went unshriven because Padre Pio was prevented from saying public Masses and hearing confessions. Additionally, the many homosexual men Gagliardi ordained would continue to damage the archdiocese of Manfredonia for the entirety of the 20th century.

It’s time to wake up as laity that this homosexual priest crisis will not be brought to an end by simply praying Rosaries or writing letters to the Holy Father. Although these tactics are good, they are not enough in dislodging these many bad shepherds that have taken over the priesthood and episcopacy. Organized, creative actions on the part of individual groups of laity to exert real pushback against Ordinaries need to be tried. Like what played out in Vieste against Gagliardi, laypeople have to take back their cathedrals from these evil charlatans. What needs to happen to make individuals like Cupich, Wuerl, Gregory and others to leave are active protests — sit-ins, lockouts, predator-free zones and more. Groups of organized lay Catholics — fully armed with Rosaries, holy water and more — must reclaim their cathedrals and shout out the Ordinary, first out of the cathedral and then out of the diocese altogether.

In centuries past, when the Church had Catholic monarchs, a country’s monarch would serve to check bad prelates when they surfaced; the bad archbishop would be escorted out of the country by the king’s soldiers. In this day and age, in the absence of Catholic kings, new mechanisms have to be invented by the faithful to remove bad bishops. Taking some cues from the good men and women of Vieste, it’s time we try something new: mass action by the laity!

In the Gospel of St. Luke, during the Last Supper we hear Our Lord make a strange recommendation to the assembled Apostles for future generations. “Let the one who has no sword buy one” (Luke 22:36). In the account of Gagliardi’s forced removal from his cathedral in 1919, no one is mentioned for carrying a sword. Nor is there any record of the homo bishop being knifed or wounded by a brick. But we do know that by carrying them, their honest concerns were taken seriously by the bishop, and he was much more cautious afterwards. While Church Militant does not advocate brandishing weapons, waging sustained, vocal protests and confrontation is not only appropriate but overdue.

It’s time the faithful take to heart the admonition by our Lord from the Last Supper account when dealing with the evil that has become entrenched in our society and in our Churches. Homosexual prelates pushing sodomy, gay marriage, abortions in the millions and so forth will not just go away by the recitation of a few Rosaries and a novena or two. What will work is a laity using vocal, visible tactics to defend their resolve to bring this all to the end, both figuratively and literally. One man said recently in group discussions about planned nationwide cathedral takeovers, “Over my dead body will they remove me from my own pew in my own Church! I won’t tolerate one more lockout; the only one to be locked out of this cathedral permanently will be my queer bishop!”